Working late the past couple of weeks has really put a crimp in my cooking style. I can’t stand just eating fast food or frozen junk. This pizza is super quick and very tasty. Thank goodness for flatbreads. You can just throw on your toppings and bake. Poof! Tasty meal in less than 30 minutes. Really. 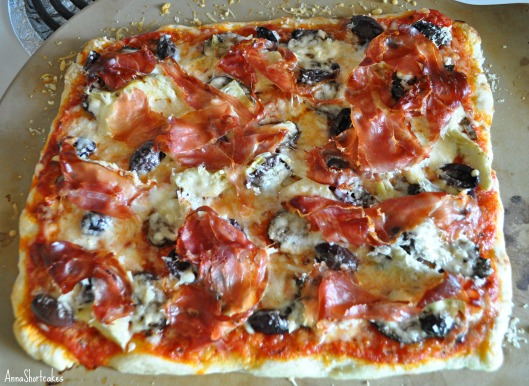 Preheat the oven to 400 degrees F. Place the flatbread on your pizza pan (I used a pampered chef stone. LOVE IT!). Top the crust with the desired amount of sauce or pesto. Add the olives, artichoke hearts, and mushrooms. Evenly sprinkle the cheese over the veggies. Scatter the prosciutto over the cheese. Bake the pizza until the cheese is melty and the edges of the proscuitto is lightly browning on the edges. Serves 3.

When I was a little kid, I had all kinds of rules about my french toast. I still do.

Rule 1: White sandwich bread is the only bread worthy of this dish.

Rule 2: Each slice must be cut into strips when eating. Not at random. Usually 8 bites per slice.

Rule 3: NEVER should the syrup or butter touch the toast. Soggy french toast is disgusting.

Rule 4: Simply using eggs and bread is not enough. You must add some flavor. Think half and half, cinnamon, nutmeg, and vanilla extract.

Rule 5: Using real maple syrup is way better (and you use less) than that fake stuff.

See what I mean? I am high maintenance when it come to french toast. On rare occasions I will make an exception. Maybe my not loving breakfast food makes me pickier. Oh well. I can be a princess sometimes. (Because Lord knows no one will allow me this petulance any other time. Plus who likes a brat?!)

In a large bowl, thoroughly whisk together the eggs, half and half, cinnamon, nutmeg, and vanilla until frothy. In a large skillet, melt a pat of butter. Soak two slices of bread in the egg mixture until well coated on each side. Fry in the hot skillet until just beginning to brown on each side. Repeat three times. Serve with bacon or sausage. I love that sweet/salty combo!