It is so cold here!! A record low of 24 today! All I can do is shake my head and seek solace in food. But as I mentioned earlier, I don’t want to gain extra weight before the holiday eats. This salad is delicious, low calorie, and easy to assemble. If I was hosting Thanksgiving this year, I might consider serving a small version of this as first course.

Pomegranate Kale, and Wild Rice Salad with Walnuts and Feta (from Pinch of Yum)

Prepare your salad ingredients and separate into 4 bowls. Top with desired amount of dressing.

Look how beautiful the salad is up close!

I just love the photo below. I don’t mean to brag. It just looks so inviting, comforting, nourishing. Like home. This dish was very tasty. The only change I would make is to add about 8 ounces of sauteed mushrooms. And maybe some onions. It could be a main dish with a small salad or a side dish. I reheated the leftovers and served it with Easter morning’s Eggs Benedict. 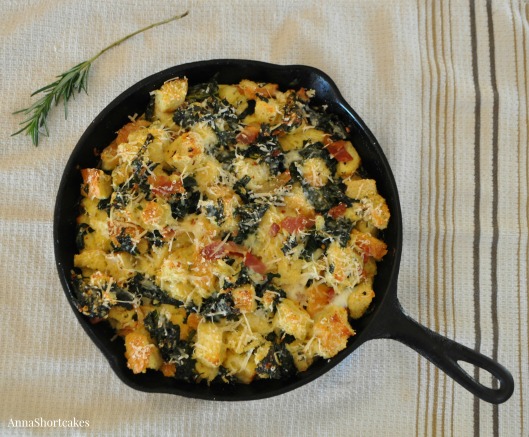 Preheat oven to 350 degrees. In a cast iron skillet, heat the oil. Add the bacon and cook until getting a touch crispy. Add the kale, salt and pepper. Toss to coat the kale in the grease and allow to wilt.

In a large bowl, whisk together red pepper flakes, eggs, milk, pepper to taste, and the rosemary. Add the bread cubes; toss to evenly coat. Add the kale, bacon, 1/2 cup of parmesan, and 1/3 cup of asiago.  Toss again and be sure everything is even distributed. Transfer the contents of the bowl into the cast iron skillet. Spread out evenly. Top with the remaining parmesan and more salt/pepper if you desire. Bake for 40 minutes until the top layer of bread is beginning to brown and the egg is set. Top with additional parmesan.  Serves 6 to 8.

I rarely buy a cookbook. Very few of them have more than 5 recipes that seem unique or appeal to my taste buds. The Smitten Kitchen Cookbook by Deb Perelman is a cookbook I will buy. It has fantastic pictures, deliciously appealing recipes, and she writes in such a delightful style. She makes you wish you were her neighbor or your kids went to the same school so you would have a reason to pop into her kitchen and try her treats in person. But since I don’t know her, I will just have to be content with making her recipes. So far I have made 5; each has been delicious. And there are so many more I want to try. 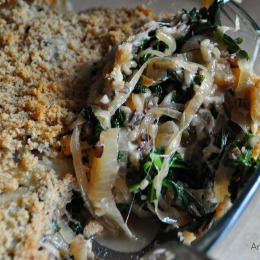 Cook the rice according the package directions. Preheat oven to 375 degrees.

Heat the butter and olive oil in a heavy bottomed skillet (no non-stick) over medium heat. Add onions, sprinkle with salt and pepper, and cook until tender and sweet (about 30 minutes). Stir occasionally. Add the kale ribbons and cook until wilted (about 5 minutes). Stir together the onion-kale mixture, wild rice, and 1 cup of the grated cheese in a large bowl. Season with salt and pepper as needed.

Grease a 2 quart baking dish with 1 tbsp of the butter. Spread the wild rice mixture in to the prepared pan. Pour broth over it. Sprinkle the remaining cheese over the rice. Toss the breadcrumbs with 1 tbsp melted butter, salt and pepper to taste. Sprinkle over cheese. Bake for 30 to 35 minutes, or until bubbly and beginning to brown on top. Serves 10 to 12 as a side dish. Refrigerates and reheats well!

I discovered this recipe after Aly Garlichands followed my blog. The name just cracked me up. I mean, who can’t identify with the name? How many times have you made something full of garlic and, no matter how many times you wash your hands, the smell just won’t come off?! I think all good housewives must at some point smell of bleach, garlic, or smoke from a charcoal grill. The smell of tomato vines, perspiration, and the outdoors are just an added bonus.

This past week the hubby and I did the Bourbon Trail (keep your eye out for future posts). That meant we drank at least three shots of bourbon each day. Then there was the beer with dinner. And there was the less than healthy food. On Friday, we went to the State Fair. I had funnel cake and an Italian sausage with peppers and onions. When I came home our travels, I longed for green goodness. I think I need a detox. This salad is my first step in recovery.

Wash the kale thoroughly. Remove the stems and slice the leaves as thin as possible. Coarsely chop the parsley. Wash and zest the lemon. Place the zest in a large bowl. Juice the lemon into the same bowl. Add the olive oil, salt and pepper to the lemon juice. Whisk until it begins to thicken. Taste and the seasoning as needed. Next, add the kale to the dressing and massage to thoroughly coat and penetrate the leaves. Let stand about 5 minutes. Add the cranberries, onion and parsley. Thoroughly mix. Set aside for another 5 – 10 minutes. Toss in the pecans just before serving.

Perfect to make for a quick supper or a tasty lunch. Full of protein and flavor, this pasta dish filled my craving for garlicy, savory yumminess. Next time I may add mushrooms and a bit of cream.

Place the kale, 1 tablespoon olive oil, lemon juice and a pinch of salt in a large bowl. Toss the kale with your hands while rubbing the oil into the leaves. This will help to soften them. Set aside.

Bring a large pot of salted water to a rolling boil. Add pasta and cook until al dente, about 9 minutes. Drain.

While the pasta is cooking heat 1 tablespoon oil in a large skillet over medium-high heat. Add the sausage and brown on both sides, turning once, 3 to 4 minutes. Reduce the heat to medium and add the beans, tomatoes, garlic, chili flakes, and black pepper. Cook, stirring once or twice until heated through, about 2 minutes. Taste for salt and adjust seasoning as needed. Transfer to a large serving bowl. Add the pasta, kale, half of the cheese and the parsley. Toss to combine. Add more cheese to taste and serve any extra with the pasta. Serves 6.

I am always looking for new ways to eat veggies and chickpeas. This flavor combo is awesome. I love dijon based dressings and it compliments the onions excellently. The chickpeas add extra bulk and protein.

Chickpea and Mixed Onion Panzanella (inspired by this recipe)

Preheat the oven to 400 degrees F. On a baking sheet, toss the cubed bread with 1 tablespoon of the oil and season to your liking. Bake for about 10 to 12 minutes or until bread pieces are browned. Set aside to cool.

In a bowl, coat onion quarters, kale, and green onions in remaining tablespoon of oil. Grill over medium heat for approx 2 minutes on each side. Be sure to keep a close eye on the kale because it cooks quickly and may need to be removed before the 4 minutes are up.

To make the dressing- combine all of the dressing ingredients in a blender or food processor. Blitz until smooth.

In a large bowl, combine the chickpeas and toasted bread. Chop up the onion quarters, green onions, and kale into bite sized pieces. Add radishes and season with salt and pepper. Top with dressing. Serves 4.

I know you read “anchovy” and thought “Blech!”

I promise this is yummy. These little fishes add umami flavor without that stinky old seafood flavor. It’s really important that you massage the kale and let it rest. It seems to break the extra fibers and makes the leaf easier to chew.

I had not made kale salad before this but I think I have stepped into another facet of the salad world. I can just imagine the possibilities. What’s your favorite kale salad? 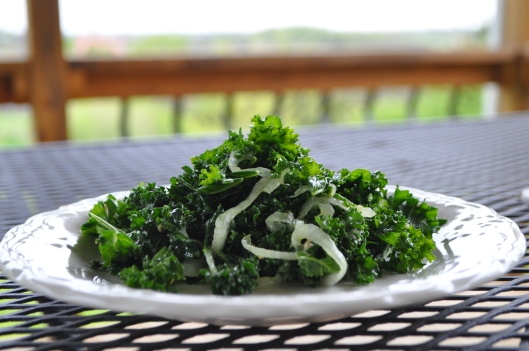 Kale and Anchovy Salad (from Food 52)

In a mortar and pestle, mash the garlic and anchovy with a pinch of salt to a paste. Blend in the juice from the lemon half. Then beat in the olive oil. The anchovies seem to melt in the juice and oil.

In a small bowl, combine the onion and thyme leaves with a large pinch of salt, then rub the salt into the onions using your hands. Let sit for 10 minutes.

Put the kale in a large bowl. Add the onion and thyme. Pour in half the dressing and using your hands, mix the greens — really get in there and work the salad; you should almost knead the greens so they break down a bit and the dressing fully coats the leaves. Taste and add more salt, lemon juice, or dressing, as needed. Let the salad sit for 20 minutes (this is an important step because it lets the flavors meld). Serves 4.

I love the kick of my togarashi spice mix. It was worth every penny and I plan to buy more here. There are all kinds of flavor combinations you could use. I can’t wait to make another batch.

Wash the kale and dry. Cut away the ribs and tear the kale into about two-inch pieces. In a small bowl, whisk oil and spices together. Spray the leaves with the cooking spray until coated lightly. Sprinkle leaves with the spice mix. Spread the leaves in a thin layer on a cookie sheet. Separate into batches if necessary. Bake at 350 degrees for 12 to 15 minutes or until crispy.

Shew! What a long name for such a great recipe. But how to shorten it?!? If you remove any of the title, you would remove such a key ingredient the reader would no longer have any idea of the true flavor palate or the recipe. So here it is… the whole long title….

In a glass measuring cup, warm in the microwave your favorite beer to 105 to 110 degrees. Pour in yeast, and let stand for 10 minutes to activate. In a greased large bowl, combine flour, sugar, salt, garlic, and hot pepper flakes. When proofed, add the liquid to the flour mix. Slowly work it in until it forms a ball. On a floured surface, knead the dough until smooth. Add more flour if the mix is too wet. Form into a ball and rub olive oil over the dough ball’s outer skin. Place back in the bowl, cover, and allow to rise for 1 hour. 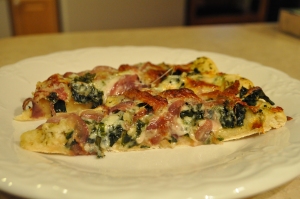 Preheat the oven to 450 F and place a pizza stone (if you have one) inside.

In a skillet, saute the onions in the olive oil until softened and brown, about 20 minutes. Set aside and cool.

In the same skillet, fry the bacon until crispy. Drain and set aside to cool.

In the same skillet, saute the kale until slightly wilty. Add a few tablespoons of water and cover, if necessary.

In the same skillet, saute the mushrooms until the moisture has been rendered.

Sprinkle cornmeal on the heated stone. Carefully spread the dough onto the stone. Spoon pesto on to the dough and spread evenly with the back of a spoon. Sprinkle the bacon, onions, mushrooms, and kale over the dough. Top with blue cheese and mozzarella. Bake in the oven for 12 to 15 minutes or until the cheese is melted and slightly browning. Remove from the oven and allow to cool for 5 minutes. Slice and enjoy!

Recipe loosely based on this recipe from Melting Pot.

This is a great quick supper with healthy ingredients that combine to create a tasty meal. It doesn’t leave you wanting something else, unless you want another bowl. 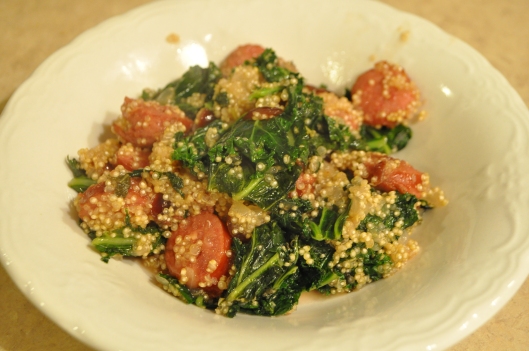 One Year Ago: Guacamole (one of my most favorite things!)

One Pot Sausage and Quinoa Supper

In a large pot, saute sausage, onions and sage over medium-high heat until just browned. Add juice, quinoa, cranberries, salt and water. Bring to a boil, scraping up any browned bits. Cover, reduce heat and simmer until liquid is just absorbed, about 25 to 30 minutes. Stir in kale, cover again and set aside for 5 minutes to allow the kale to wilt.