Produced by Lexington Brewing and Distilling Co., Kentucky Bourbon Barrel Stout is aged up to 6 weeks in freshly decanted bourbon barrels. Dark brown in color, this beer has a smaller amount of carbonation than some other dark beers. The head is minimal. The flavor starts off with a bit of bourbon and caramel but is soon overwhelmed by the coffee flavor (a down side to me though I LOVE coffee). Based on my initial smell of the beer, I expected there to be a stronger chocolate flavor; I like that it is subtle but not robust. I think this makes the beer more appealing. The consistency is somewhat thinner, more watery than I had expected. You could easily drink several in a row without feeling overly full. The carton suggests serving this beer in a snifter. Since I don’t have a snifter, I used a Guinness glass. Overall, this is a decent beer. I would like to try it on tap. It won’t be a “go-to” beer but it represents Kentucky and it’s bourbon industry well. I would buy this beer as a gift to a beer/bourbon/cocktail enthusiast as representation of my home state. 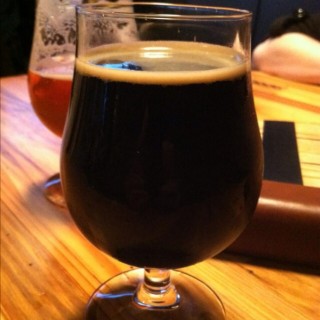 This beer was named “Best Beer” at Best of the Bluegrass 2013 and won a Bronze at the Australian International Beer Awards 2013.

Photos from here and here.